I pocketed $32.66 on Thunderstruck 2 – a Norse mythology-themed 5 reel, 243 ways slot by Microgaming, using my own money. I’ve made 1,100 spins, each worth 30 cents. Applied tips, remarks, and details of my experimental test are below.

On this page you’ll find:

So, my name is Rhyker. I am developing my own blog about real money casinos. Today I want to share my studies on one of the very best online slot machines which hit casinos in far 2010, Thunderstruck 2.

In the review, I’m going to begin with the results of my real money play solely at Thunderstruck 2. You can check any paragraph of interest, but it’s better to start with my real money streams video overview above. Then you will understand what exactly might happen during your gameplay and how much money this slot pays in practice. Otherwise, the key findings and my verdict are at the end of the Thunderstruck 2 slot review. 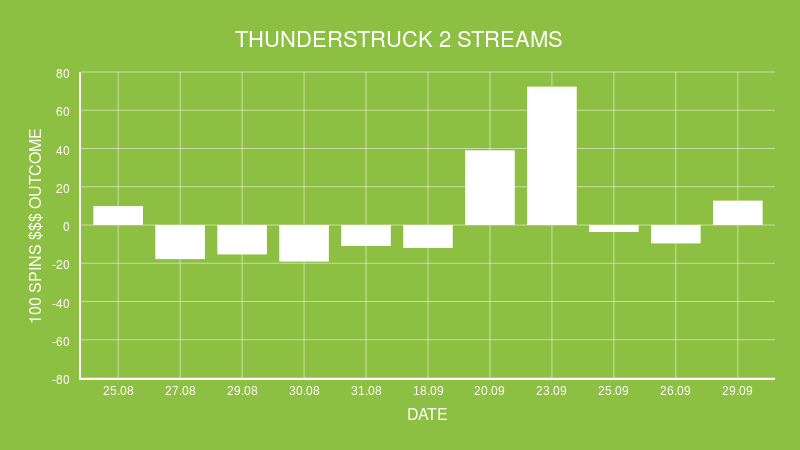 I’m 100% transparent with my figures! I call myself a “Google Sheet Guy” as I’m kinda trying to discover the best-paying slot machine by recording data about my casino game sessions. Here I’ve got 4 winning vs 7 lossmaking spins runs. Still, I made money on the slot. Just look up at the graph of Thunderstruck 2 where I charted all the details on each stream run. What more can I add? And the wins outweighed the costs of losses. Below there is the information on my best and worst case scenarios in Thunderstruck II.

My Top 3 Casinos to Play Best Microgaming Slots in 2021 ⤵

Where to play it you ask me? Here are my favorite 3 top Microgaming casinos to play Microgaming slot games below. The return is all the same across all Microgaming operators but casino bonuses and terms differ. Anyway, going with any casino, you’ll get a licensed, highly-trusted gambling website, which has been tested (by me) on fast payouts.

Thunderstruck 2: Getting Started for Real Money

It’s one hundred percent safe to play for real money at online casinos I recommend. The video slot RTP is attested by eCOGRA and casinos are licensed by the authorities like Malta or/and the UKGC, and more importantly, it carried out my experimental check!

All that’s left to do is to register with a real-money Microgaming casino, make a deposit of $10 or $20 for a start, and launch Thunderstruck 2 to reap some benefits! What exactly are the benefits? That part is coming next.

As there’s not payline but rather 243 ways to win. I played with a minimum stake, which is 30 cents, you can’t go with less wager here. And I haven’t raised bets though it is possible to bet $15 per spin. In the case, my wins would be of about $1,633, I guess. But you never really know what can happen.

Quite apart from the fact that it’s an old game, there is Auto Play function, very basic though. See, I’ve chosen to play 100 auto spins, but you can set up 10, 25 or 50 ones. If you ask me, here I’ve won different awards rather often. However, I haven’t been fortunate enough to get out the maximum – 8,100x a bet/$121,500 – during free spins rounds in the Loki feature on conditions that the Wildstorm is in play too.

In any of the paying lines, a combination of 3 to 5 of any symbols in a row results in a small or rather big win. Let’s check the highest-paying icons themed on the Nordic mythology and lower-paying cards typical for casinos.

How to enter bonus games? Oftentimes, people think they can win 25 Free Spins or up to 6X Multiplier right when they start the gameplay. They’re wrong. Bonus features can be played this and no other way. Now let me explain to you that in detail.

How to Get into the Great Hall of Spins

Collect 3, 4 or even 5 scatter icons, the Hammers, and you are in! Now let me relate the things as they actually happen below.

If 3-plus Bonus Hammers appear, Valkyrie Bonus is activated. Here you get 10 Free Spins, where each win is multiplied by 5 times. And I enjoyed it all the way. I’ve been playing it 4 times before I could proceed to the next level.

3-plus Bonus Hammers caught on the 5th time unlocked the Loki Bonus for me. Here are up to 19 Bonus Spins on offer. 15 Free Spins + additional 1-4 if you trigger 2-5 scatter symbols respectively. Plus, if Wild Magic logo appears on the 3rd reel, it begins to act like the wild – replaces other icons. Potentially, it can be very rewarding.

Having got 3 scatters for the 10th time, I leveled up to Odin, where 20 Free Spins and 2X, 3X Random Multipliers are available. To win the highly-anticipated 6X Multiplier, 2 Ravens should go down on the reels at a time. In my experience, it happened to me, maybe, once or twice only. More ofte, I got 1 Ravens that turn symbols into 2x only.

And I’m still looking forward to unlocking Thor to FINALLY get the maximum amount of Free Spins – 25. It has Rolling Reels feature, which gives the potential to win more at the same spin. It looks like this. You make a win combo of 3 Viking Ships. You get paid, then these 3 Viking Ships disappear. Other symbols fall on their position. The process repeats itself until you stop winning.

Here, with each respective win, the prize is set to be multiplied by 2X, 3X, 4X or 5X. And all that can happen to you at one spin! Or it won’t happen. The multiplier resets to 1x when the “cascading” icons don’t form a prize combination. Unfortunately, Thor’s Free Spins cannot be re­activated.

Wilds come by storm, completely randomly. It’s all about the next speciality of the casino game. I haven’t seen too wild wins during the wild storm, however, potentially, 5 reels turning up wild can result into a big catch – a win of 3,000x the stake.

Personally, I’ve got only 2 reels covered with wilds once. But you have to differ reels from paylines. Only 5 wilds on a payline are worth 1000x your bet, which means having two entire reels of wilds pays according to the paytable of other symbols surrounding them.

The Norse mythology-themed game is made around the Norse God of Thunder. With a cool soundtrack playing as I spun the reels, I’ve joined Thor on his adventure with 3 more ancient Norse gods. And all it happened in the realm of Asgard. However, the graphics is a bit outdated. No wonder it was launched 10 years ago already.

What Rhyker Thinks: My Verdict on Thunderstruck 2

Rhyker Hackary is satisfied with Thunderstruck 2 improvements, most notably, 4-level free spins bonus games reflecting 4 Supreme Beings, aka the Hall of Spins feature. In fact, I can even say I’ve progressed in this fun slot game pretty fast during my gameplays. Check the sneak peek video of my streams. At this point, I’ve unlocked 3 out of 4 features, more specifically, Valkyrie, Loki and Odin. Overall, the wins were bigger than my losses.

Any cookies that may not be particularly necessary for the website to function and is used specifically to collect user personal data via analytics, ads, other embedded contents are termed as non-necessary cookies. It is mandatory to procure user consent prior to running these cookies on your website.